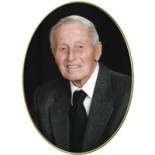 Mr. John Bogaart, a resident of Wallaceburg, passed away on Friday, September 23, 2022, at Chatham-Kent Hospice, in Chatham, at the age of 90.

John was born in Wallaceburg and was a son of the late Peter and Mathilde (Pieters) Bogaart.

Also survived by many nieces and nephews.

As an expression of sympathy, donations to Chatham-Kent Hospice or Chatham Kent Health Alliance may be left at the funeral home.