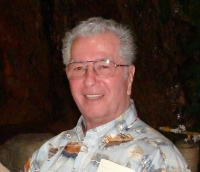 Born in Watsonville, Calif. to Fred and Josie Basque, Frank passed away on December 30, 2011. Frank graduated from Roseville High School and spent his entire life living, working and raising his family in Roseville. He worked for PFE/SP Railroad for 35 years. Frank is preceded in death by his wife Glenda Basque, whom he married in Reno, Nev. on June 30, 1956 and enjoyed 54 years of marriage.
Frank is survived by his four children Julie (George) Stradiota of Newcastle, Calif., Keith Basque of Granite Bay, Calif., Karla (Larry) Steffen, Lincoln, Calif. and Cathy (Alan) Askew, of Roseville, Calif., his sisters Concha Gayaldo and Carna Wright and twelve grandchildren and nine great-grandchildren.
Frank served in the U.S. Army stationed at The Presidio in San Francisco, Calif. He was an avid deer and dove hunter and a fantastic dancer who loved the fiestas at Club Espanol where he was a member. Frank was a member of St. Rose Catholic Church in Roseville, Calif. He enjoyed his many friends and cousins.
Services to be held at Lambert’s Funeral Home at 400 Douglas Boulevard, Roseville CA 95678 on Saturday, January 14, 2012 at 10 a.m.