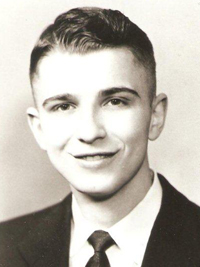 He was born June 12, 1939, in Council Bluffs, the sixth child of Walter Ewart Byers and Naomi Elizabeth (Kieef) Byers. He was baptized in the Catholic faith as an infant. His early years were spent on the farm near Weston and later in Council Bluffs. He graduated from St. Francis Xavier High School in Council Bluffs in 1957, and received a President’s Scholarship to attend Creighton University in Omaha, Neb., where he graduated cum laude with a bachelor’s degree in education in 1962. Walter taught for several years. He worked as a radio technician in Wyoming and Arkansas. Before retirement he worked for Arkansas Educational Television Network in Arkadelphia, Winslow and Mountain View. Walter had an avid interest in family history and natural history.

Surviving family members include Walter’s siblings, Mary Roche and husband, Lawrence, Joseph Byers and wife, Phyllis, Matthew Byers and wife, Helen, and Alice Zaiser. He is fondly remembered by his many nephews, nieces and friends.

Tommie was quite the storyteller (especially the early days) adding tidbits on the weather (wind direction and velocity too!), time of day and what he had eaten were included. He enjoyed dancing, traveling, taking rides ‘out the road’ and walking around town, no matter what the weather, watching the boats, fisherman—and, visiting with everyone he ran into.

At his request, a funeral was not held. His remains will be laid to rest with wife, ‘Maria’. A celebration of life was held January 14th at the Elks. Contributions in Tommie’s memory may be made to: Kodiak Senior Center, 302 Erskine Ave., Kodiak, AK 99615.