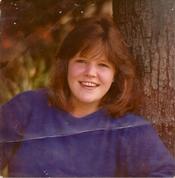 Miss Kathy Michelle Ayers, age 47, of Jefferson, MD passed away on Friday, December 2, 2011 at her residence. She was engaged to her fiancé, Mark Fucci of Frederick. Born on January 19, 1964, she was the daughter of the late Earlin "Ekie" and Katherine "Patsy" (Snoots) Ayers.

Kathy graduated from Middletown High School. She put in over 20 years of service as a bus driver for the Frederick County Public Schools. Her main route was in Middletown, however she also ran routes in Jefferson, Brunswick and for the career and technology center. She was a motorcycle enthusiast, and loved riding. She was great at shooting pool and frequently beat all of her opponents. Above all, she was a great mother, strong hearted, and very strong physically. She persevered through a lot.

She was the loving mother of Blaine Edward Ferrell of Jefferson. She additionally leaves behind a close family cousin Debbie Baker who has always been there for the whole family as well as her former mother-in-law who she remained close with, Mary Jane Ferrell of Point of Rocks.