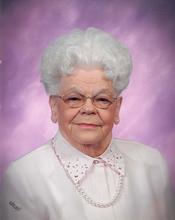 Betty Jean Tate, 83, of Fourth Street, Pleasant Hill Community, Shinnston, passed away at 6:25 p.m., Sunday, December 11, 2011 at her residence. She was born at Helen’s Run, Worthington, March 29, 1928, a daughter of the late, Ora and Dessie Francis Garrett Moorehead. Her husband, Louie Tate, preceded er in death December 12, 2000. She is survived by her son, Jimmy Joe Tate, Shinnston, one granddaughter, Kalyn Tate and her mother, Tracey Tate, Shinnston, one special nephew, Paul David Pyles and his wife Patty, Fairmont, four sisters-in-law; Mary Tate, Spelter, Waneta Tate, Meadowbrook, Annette Pugh, Ohio, and Pooch Moorehead, Ida May, and several other nieces and nephews. She was also preceded in death by three brothers; Alan, Richard and Howard Moorehead and one sister, Mary Rogers. Betty had formerly worked at the Company Store at Hutchinson and for Owens-Illinois and Westinghouse. She was a member of the Jewel City Church at Haywood and was a loving mother and grandmother. Friends will be received at the Perine Funeral Home, Rt. 19 south, Shinnston, from 2-4 and 6-8 p.m., Tuesday, where funeral services will be held at 11 a.m., Wednesday, December 14, with Pastors Robert Shingleton and John Pigott officiating. Interment will be in the Shinnston Masonic Cemetery. Condolences may be extended to the family at www.perinefunerals.com. The Perine Funeral Home is honored to serve the Tate Family.