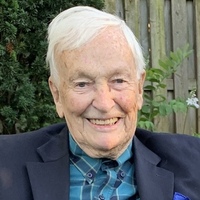 It is with immense sorrow that we share the news of the sudden passing of Ian Hugh Drummond Bovey on Sunday November 6, 2022 at Oakville, Ontario. Predeceased by his wife of 66 years, Constance Diana (Wright), four days earlier, on Wednesday November 2, 2022, he will be greatly missed by his children Peter (Sandy Reinhardt), Anne (Barry Bull), Jennifer, Pamela (George Jeffrey) as well as 13 grandchildren and 5 great grandchildren. Born Thursday March 10, 1932 in Montreal to Elizabeth (Kennedy) and Quentin Bovey, and predeceased by his sister, Audrey, and brother, Christopher, Ian grew up in Westmount, attending school at Trinity College School in Port Hope, ON and McGill University in Montreal, QC.

Ian began his career working for the Sun Life Assurance Company and quickly found a passion for Human Resources specializing in pension and labour negotiations for Domtar and then moving to Nortel where he retired as VP of Human Resources. His career took him all over North America and he was especially proud of all the places he had visited for work. He was also a sought after speaker for pension and human resource conferences and, as President of the Canadian Pension Committee, was often asked to explain Canadian pension planning at events in Canada and the United States. He was most proud of his success in advocating for, and implementing, family benefits for same-sex partners at a time when there was no recognition of these families in our country. Outside of work, he volunteered his time to many groups, beginning with the Montreal West CRA and expanding into various groups in Oakville when the family moved there in 1978. He particularly enjoyed his work with the Canadian Red Cross where he volunteered as a bus driver, taking people to and from their hospital appointments.

Dad was the consummate host and friend. Like Mum, he opened our home to many and embraced them all. He was able to make people feel comfortable and important and would easily find common ground for conversation, making his friend group very diverse. He had a strong appreciation for the arts, with music and theatre being his favourites. He also loved watching sports, be it hockey, golf, tennis, football, curling and so on, but his favourite viewing happened when supporting his children’s and grandchildren’s activities. A cross-country skier for many years, his true love was golf, which he learned to play in Métis-Sur-Mer, QC. He continued to enjoy golf well into his 86th year, socializing with his golfing friends, the GRUMPS, through this year. Hosting

events with Diana was a specialty, with numerous parties and gatherings happening at their homes, such as the 50+ years of annual New Year parties at Glencoe, the family cottage in Ste. Adèle, QC.: a true highlight each year! Many of these gatherings were enhanced by his guitar and ukulele playing, his singing of classic popular songs and his talented mixing of Bloody Caesars!

Ian was a man of quick wit, great intelligence and tremendous integrity. He could be found debating current events with family and friends and turned crossword puzzles into an Olympic event. We will miss our father’s wise counsel, his support, his love and his laughter. He was important to so many: known as Ian, Dad, Drummie, Uncle Ian and “Eeeee!” on cards to Diana. A larger hole has now been created in our hearts, but we find some solace in the knowledge that Diana and Ian are together again.

Visitation will be held on Thursday November 24 at the Kopriva Taylor Community Funeral Home, 64 Lakeshore Road West, Oakville from 2 – 4 pm and 7-9 pm. Memorial service will be held on Friday November 25, 2022 ath St. Jude’s Anglican Church, 160 William Street, Oakville. In lieu of flowers, please consider donating to either The Kerr Street Mission or The Canadian Cancer Society in Diana and Ian’s memory.