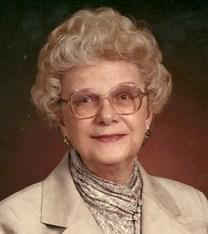 Dorothy Metscher Andropolis passed on from this life on Monday, December 12th, 2011 at the age of 93. She was born February 12, 1918 in Madison, Wisconsin, the daughter of Earl and Minna McCallan. Upon the death of her father when he was a senior at the University of Wisconsin, she and her mother moved to Sheboygan where she lived her entire life. Dorothy attended Franklin Elementary School, Sheboygan Central High School, Sheboygan Business College and the University of Wisconsin Extension with classes in economics, business and finance.
In the midst of the Great Depression she ventured out into the investment world just at the time the Mutual Fund Industry was born, which opened unlimited opportunities for widely diversified investing in American Industry. Her career began in 1935. In 1940 Dorothy and LeRoy Metscher were united in marriage à a marriage they enjoyed for 58 years.
In 1972 she was invited to join the staff of the H. C. Denison Co. as an investment broker, and was elected Vice President in 1979, holding this position until retirement. Her working years were active, happy and prosperous. Clients became friends which, in many families, extended to four generations. Her gentle nature carried an essence of caring, concern and consideration for all. Her philosophy, whenever there was a need for help was: "Let me do it now, let me not defer or neglect it, for I shall not pass this way again." This was reflected and expressed in a deep devotion to family, friends, church and community.
Dorothy was a pioneer for mutual funds and for women in the investment industry and received numerous awards for achievement over the years. She was a member of the Nuveen Advisory Board and honored in the Nuveen Hall of Fame and also was appointed a Member of Putnam Investors Golden Scale Council. She was even recognized as the top seller for John Hancock Mutual Funds in the entire United States. Dorothy worked as an investment broker for over 65 years and had one of the longest careers in the industry. Clients continued to call her for many years after her retirement.
Dorothy’s husband Lee passed on in 1997. At her 65th high school reunion, Dorothy was reunited with her high school sweetheart, John Andropolis, and they were married in 2002 at the ages of 84 and 85. John passed on in 2007. The five years they had together were some of the happiest years of her life.
Dorothy was a life-long member of First Church of Christ, Scientist, Sheboygan, serving in many capacities, even as their financial advisor until her passing this week. She lived her faith through prayer and by personal example. There are many and often untold stories of counseling and individual financial assistance that she provided to family, friends and anyone she came to know to be in true need. Dorothy was a strong proponent for education and she motivated and personally helped many young people through a college education.
Dorothy is survived by her loving nephews, Stephen (Rosalie) Koehler, Lance (Jeanette) Koehler, and Jim (Kim) Koehler; niece, Dr. Gia (Sonny Landry) Morgan; grandnephews, Jason (Dr. Tahlia Spector) Koehler, Matthew Koehler and Nicholas Koehler; grandnieces, Wendy (Edward) Beran, Amanda (David) Schutz and Diandra Koehler; great-grandnephews, Edward Beran, Jonah and Gavin Koehler, Kaler Schutz; great-grandnieces, Suzanne and Kasey Beran.
Christian Science Services will be read by Jack Myers at 12 Noon on Saturday, December 17th at Ballhorn Chapels, 1201 N. 8th Street, Sheboygan. A time of visitation and support will be held from 10:30 a.m. until the time of services.
In lieu of flowers, donations may be made at Ballhorn Chapels to the "Dorothy Andropolis Memorial Fund". The funds will be used for the benefit of "Our Home Christian Ministries" of Oostburg, WI which provides a home for adults with developmental disabilities in our community.